Promiscuous Dad Gets 23 Months in Jail 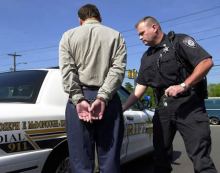 After fathering 23 children, Howard Veal, who may be the biggest deadbeat dad in America, has been sentenced to 23-48 months in jail for failing to pay child support.

“In my entire career I have never seen a case like this where so much was owed to so many and ignored,” Kent County Judge Dennis Leiber, who has presided over support cases for more than 20 years, told ABC News.

The Michigan man accumulated a debt of more than $533,000 in child support payments, according to court records. Veal has allegedly failed to support his children beyond a few meager payments.

“You are the poster child for irresponsibility,” Leiber told Veal at a court hearing, according to The Grand Rapids Press. “You’re an insult to every responsible father who sacrifices to provide for their children.”

In the last seven years, Veal reportedly paid less than a total of $90 for two of his children’s upkeep. In July, Veal pled guilty to failure to pay child support to Sherri Black for his children aged 16 and 11 years old.

Of the more than $63,000 owed to Black, the Muskegon High School graduate was asked earlier this year to pay 10 to 100 percent of the child support owed for reduced charges. By late August, Veal had paid nothing.

Black, the mother of two of Veal’s children, wrote in a letter that it’s heartbreaking to choose between shoes and rent.

With a checkered employment history, the 44-year-old Veal has been living with his current girlfriend, who is the mother of four of his children.

During a presentencing investigation, Veal disclosed he fathered 15 children with a total of 12 women but said he could not remember them all.

Findings by a more comprehensive report ordered by the court alleged Veal fathered 23 children by 14 different women. Children that Veal has also allegedly failed to support.

Michigan Assistant Attorney General Mitchell Wood wrote the judge to seek sentencing beyond the guidelines: “The Attorney General’s Child Support Division has prosecuted thousands of felony nonsupport cases since its inception, but none as outrageous as this. For a decade, between 1989 and 1999, the defendant impregnated at least one woman every single year.”

After hearing the facts about the case, the judge said he deviated from sentencing guidelines for substantial and compelling reasons. The guidelines called for no more than six months in jail.

“When you create a human being, I think you have a fundamental responsibility to provide for that child with necessities like food, clothing and shelter,” says Judge Leiber. “Those were the thoughts running through my mind when I saw a man that was spectacularly irresponsible.”

Veal says he’s been out of work and pays what he can. At least 14 additional child support cases are pending against him.

The case has lighted up the online comment boards in Michigan, where unemployment tops 13 percent.

The Kalamazoo Gazette, in an opinion piece on its Website, said the tough sentence doesn’t solve much.

“Explain how it makes sense to take a man who can’t or won’t pay child support and stick him in jail for up to four years where taxpayers will then have to pay more than $30,000 a year to feed and house him?” wrote Joyce Pines.

But the Saginaw News said that enough is enough. “We’re with the judge in our astonishment at the breadth of the accusations in this case. The father says he tried to make child support payments from his unemployment checks. But — come on! — there’s no way that 23 children could be even partially supported on that kind of income.

How American Freedom Has Been Destroyed

Comments on: "Promiscuous Dad Gets 23 Months in Jail" (1)