Walter Scott and the Need for Child Support Reform 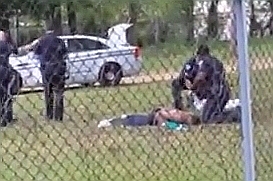 Walter Scott’s death was striking because a police officer fired eight shots at him while his back was turned. When something so tragic occurs, observers tend to wonder why. The officer’s actions and utter disrespect for human life can never be justified. But recently, the New York Times published new information about Scott’s split second decision to run — his child support case. According to his brother, “Every job he has had, he has gotten fired from because he went to jail because he was locked up for child support.”

Elements of Scott’s story reflect existing concerns about the child support system. A debate over potential large-scale reform is more than a decade overdue. The seeming impossibility of change has always loomed ominously large, overshadowing calls for reform and pushing them into the dark corners of the policy world. However, at this current political moment, there are national conversations about policing, bipartisan criminal justice reforms and an existing White House initiative focused on men and boys of color — concepts that would have seemed laughable just a few short years ago.

There are some fathers who absolutely refuse to care for their children and they should be held accountable. However, the current system reaches well beyond that group, creating negative consequences for men who are rarely credited with being caring parents and are simply too poor to pay. The political explosiveness of the “deadbeat dad,” a figure that some researchers say sprang out of the same sources as his female counterpart (the “welfare queen”), helped distort the foundations of child support policy. The system seems to partially rest on underlying beliefs that low-income men, and especially those who are black, avoid work and financially providing for their children at all costs while also being permanently childlike and in need of both discipline and lessons on how to behave.

Over the years, the program has effectively served many families (transferring funds from one parent to another) for which it should be applauded. However, policies built on a foundation of stereotypes about numerous men who don’t want jobs stand in stark contrast to the reality of numerous jobs that don’t want the men. Researchers like William Julius Wilson (More Than Just Race), have documented decades long trends of disappearing job opportunities for low-skilled workers as well as increased criminal justice involvement which further leads to employment discrimination.

When entities spend significant time on activities that fail to help and that actually hurt parents and families, it’s often useful to redirect their energies elsewhere. Reforms should shift the program mission and values away from damaging racial stereotypes that hurt families of all races and towards efforts to accurately diagnose the needs of families and take ‘pro-social’ action to address them.

One useful primary goal would be to comprehensively address the family law needs of low and middle-income families, helping with a very real challenge — the increasing and extraordinarily large number of families who can’t afford an attorney or who don’t feel comfortable representing themselves in legal matters. In doing so, agencies should assume that parents of all racial and class groupings share in a desire to care for their children, suggesting that they be treated with respect and provided with quality customer service. This would build upon efforts to accurately identify bad dads whose non-payment is rooted in an adamant refusal rather than their economic circumstances.

With such a vision, services would start to look much different. No longer treated as enemies of the state, low-income fathers would be less likely to literally and figuratively run away from child support. The sole focus wouldn’t be on a father’s monetary value but on improving father-family relationships. Court decisions and unaddressed legal needs would be replaced by model practices like mediation that support mothers and fathers in making their own decisions for their families. Punishments like imprisonment would be replaced by employment assistance. And other proposed reforms designed to guarantee child support for women and children would avoid potential incentives to hound men for unaffordable reimbursements of funds states pay out to women and children.

Some states have already experimented with such reforms, finding positive results that have included increased child support payments by fathers and greater parental satisfaction with agency services. The Obama Administration has encouraged states to adopt these best practices while proposing helpful new rules. However, there are limits to the changes that can occur without Congress overhauling currently existing state requirements and incentives.

We need a fruitful, progressive conversation that abandons a focus on the status quo and reform efforts that toy around existing edges — instead choosing a new vision for the future that endeavors to do the hard work of changing the culture and functioning of a system that means so much to so many.

Of course, there is no mention in this article about U.N. Treaty or the Bradley Amendment, which prohibits child support arrears from being changed or removed – but the article does pretend to care (and is much kinder than I am). Meanwhile, the welfare queens still have control over America at great cost to all Americans. – MJR